U.S. -- Bellavita Tile, a leader in the North American tile industry, recently announced the appointment of Damian Skinner as its new Regional Manager for the Central United States. 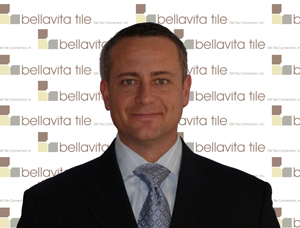 Skinner, who has been in the tile business for 16 years, began in the industry alongside Mike Ward -- Bellavita's current North American Sales Manager -- when they both worked at EPC America.  While at EPC, Damian transitioned from the position of Operations Manager into sales. This was followed by a move to Chicago, where he launched a new EPC branch.

Four short years later, Skinner was running his own business, International Tile Direct (ITD), in Chicago.  He joined Mike Ward again in 2008 when ITD became the agent for Bellavita Tile in the North Central U.S.  After several years of successfully promoting Bellavita, Skinner accepted the opportunity to join the company as a permanent team member.  He officially assumed his new position on October 1st of this year.

"We are extremely pleased to have Damian on board," stated Ward. "He knows our products, understands our approach and complements our existing team. Bellavita has been doing very well, and we anticipate further growth in the North Central U.S. with Damian on board."