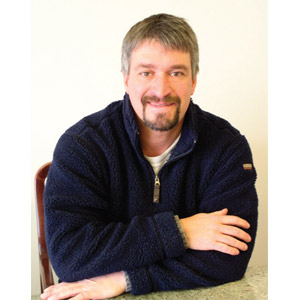 Raised in Little Ferry, NJ, Michael graduated from the journalism school at Rutgers University in 1992. He started with us at Stone World in March of 1993 and immediately dug in -- learned the industry and soon began to cover it in his unique style that has come to shape our publication throughout the last two decades. When Stone World began to shift its focus to the fabrication segment of our industry, and the fabricators themselves, Michael immediately set out to meet with fabricators from around the world, visiting their shops, and attending workshops and seminars. He became the industry expert we all came to know and rely upon for the latest news from our industry.

Named editor in ­­­­1995 , Michael became a fixture at trade shows around the world;  Verona , Carrara, Nuremberg, Orlando, Vegas, Brazil, Atlanta and just about anywhere else there was a stone industry event to cover. When we launched our Stone World Fabrication Workshops, it was Michael's initial idea to start the series and his knowledge and leadership that kept them going.  In 1997, Michael was named Associate Publisher ­­­to reflect the evolution of his role to more than just the editor.  He was our spokesman, but he was also the industry's fiercest advocate, most vocal supporter and in many ways, a leader of this entire industry.

Michael has moderated countless fabricator forums at trade shows over the years, and he has been flown in to speak at events all over the globe. He was incredibly proud to receive The Stone Master (Mastro della Pietra)  award in 2005 at a ceremony in Verona, Italy, one of his favorite destinations in the world.  Michael was also especially proud of an award he received in 2001, in Macael, Spain, the Premios Comarca del Marmol, XVII Edicion.

He launched several important products for Stone World, including our eNewsletter, which is now bi-weekly, and he managed several of our custom publications, including his favorite project, the Building Stone Magazine, published with the Building Stone Institute.  There will be a more complete tribute worthy of his memory in a future issue of Stone World and on our website, but we wanted the world to know a little about our friend and colleague.

Our deepest sympathies go out to his family and loved ones, of which there are many.

Aliens Among Us: A Tribute to Engineers