Coverings 2015 sets its sights on Orlando

With more than a dozensuccessful shows in the Orlando area, next year is anticipated to be the largest show since 2009, with an overall increase in both square footage and number of exhibitors. In total, the 2015 show is projected to have 23,000 attendees and 1,000 exhibitors across 400,000 net square feet of exhibit space. Coverings 2015 will be held April 14-17, 2015 at the Orange County Convention Center. 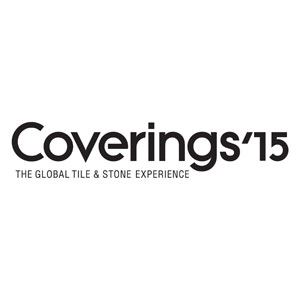 "We're really excited for what we anticipate will be one of the most impressive shows yet," said Karin Fendrich, Coverings show director. "At Coverings 2014, we had the highest re-sign rate in the history of the show, with more exhibitors committing to space onsite for the next year's show than ever before. We feel this signifies a renewed confidence and revitalization of the tile and stone industry and that Coverings continues to provide valuable opportunities to its stakeholders."

What's more, Coverings 2015 has revealed an attractive new logo and creative campaign that communicates the breadth and depth that the show offers each year to more than 20,000 attendees. The show's website, marketing and advertising materials will showcase the new design concept.

Developed in partnership with Giona Maiarelli, creative director of Maiarelli Studio, the new logo features a series of overlapping, colorful square frames that focus on people. Coverings' new logo form features a slimmer font, intended to communicate the show's sophistication and value for its audiences, particularly the architecture and design communities.

"Coverings represents an important community of colleagues, clients and friends, and the design spotlights this as a critical foundation of the show," said Maiarelli.

To learn more about Coverings and see its revamped look, visit coverings.com.

Coverings Presented a Showcase of Tile in Orlando