An outside wall of the Chrysler dealership in Napa Valley, CA, is a colorful display of custom-produced mosaic tile that walk passersby through the history of the car manufacturer

Jump to Sidebar:
The Collaboration Between Artist and Mosaic Manufacturer

Local California artist Kristina Young was tasked to visualize the story of Chrysler through a 100-foot-long, 10-foot-high strip of concrete wall of the car manufacturer’s dealership in Napa Valley, CA. Young worked with a team at Artaic, a Boston, MA-based custom mosaic manufacturer, to produce a colorful tile mural to fulfill her client’s request.

Young recently shared details with TILE about the project. Here’s what she had to say:


TILE: What was the inspiration behind the mural for the Chrysler dealership?

KY: The client was The Gasser Foundation, whose board asked me to create a large (940 square feet) exterior mosaic for the dealership that would celebrate the history of Chrysler Motors in honor of their founders, Peter and Vernice Gasser. In 1957, Peter Gasser opened the first car dealership on Soscol Avenue, establishing Napa’s “auto row.” Their family foundation works to benefit the local community, as well as owns multiple properties in Napa, including the one where the Chrysler dealership is located. 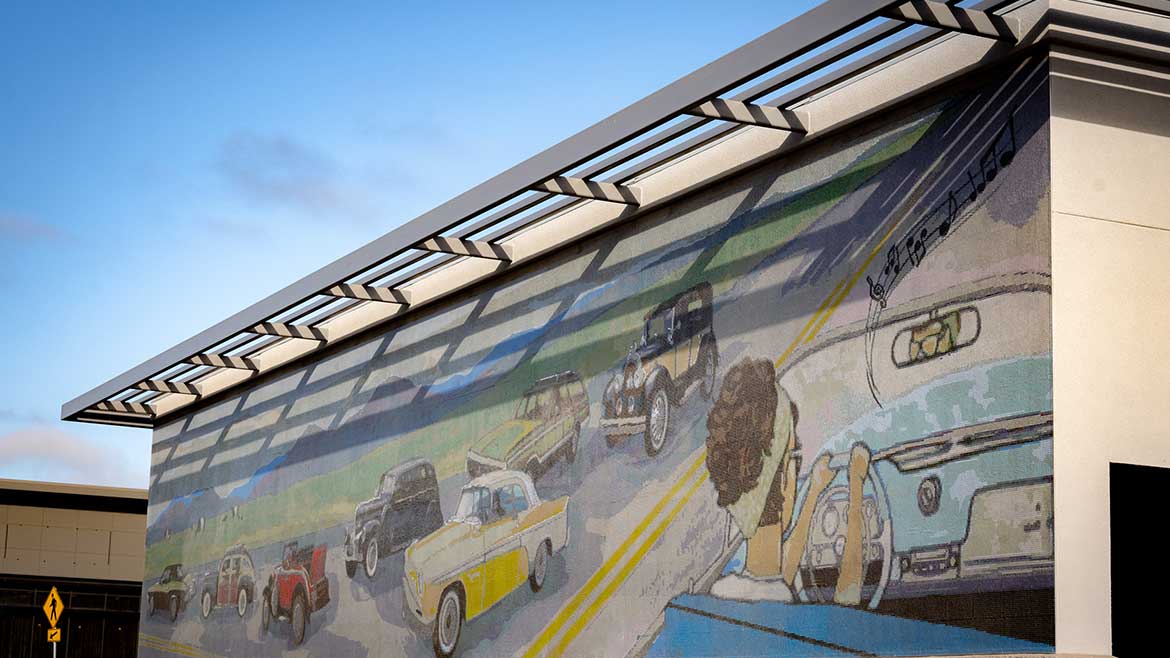 Click on images to enlarge. | Photos by Israel Valencia of Infinity Visuals

In the design, these seven cars travel south toward the bottom of the composition. One (a Plymouth De Soto Firedome Convertible) is positioned in the bottom right corner so that the viewer is looking over the driver’s shoulder as if sitting in the backseat with a clear view of the dashboard, the car’s radio and emanating musical notes. In the 1955 edition, Chrysler introduced the world’s first transistor car radio as a $150 option. The subsequent popularity of car radios heralded a huge shift in recorded music.

I wanted to place the scene in Napa, so in the background, I added a Napa Valley-inspired landscape with the Mayacamas Mountains. On the left side, I included a group of grazing Belted Galloways, the iconic ‘Oreo’ cows from Stewart Ranch familiar to drivers on the southern part of Highway 29 through the City of Napa.

I selected the color palette to complement the building’s exterior and also provide a joyful pop of color in line with the vintage car paint selections. The design also includes white gold tiles in the chrome areas of the cars as an additional element.

TILE: What were some reasons for choosing custom mosaics from Artaic?

KY: I was commissioned to do this project in 2019 and about to start manual production with a small team of mosaic artists in my studio in March 2020. When the pandemic shut everything down, including construction of the new dealership, the whole project was delayed. But once things started to open back up, I realized I would not have enough time to create the piece by hand and keep to the construction schedule (which had restarted earlier). I started looking for an off-site producer I could partner with. I had never worked with a mosaic fabricator before, but after speaking with Artaic and seeing samples of their other public art mosaic work, I knew it would be a good fit. The cost was also comparable to making it in-house, but Artaic could make it in about half the time.


TILE: I understand this was the largest project you have done to date. Did you approach this installation any differently than others?

KY: There were so many aspects of this process that were new to me. I design all of my work by hand and then digitize my images to create mock-ups to make installation and site-specific decisions. Then, once I have a final design, I scale it and produce it by hand. This process always involves making adjustments and decisions along the way. So, when working with Artaic, I had to have the design finalized to a level I normally don’t before beginning production.

Before this project, I had also produced mosaic pieces on my own or in small collaborative teams. I have worked on site and off, but never sent a design across the country to be made by strangers, let alone a machine! This really was the hardest part of the project – to let go of the creative process in such a fundamental way. But, the Artaic design team were extremely adept at helping me translate my design into the grid pattern using their software. I had also never worked with a grid pattern before; I typically would hand cut each of the tiles to create the shapes needed.

In terms of scale, this partnership was a great way to go. It has opened up so many possibilities for me to focus on my design skills instead of spending all my time in production. 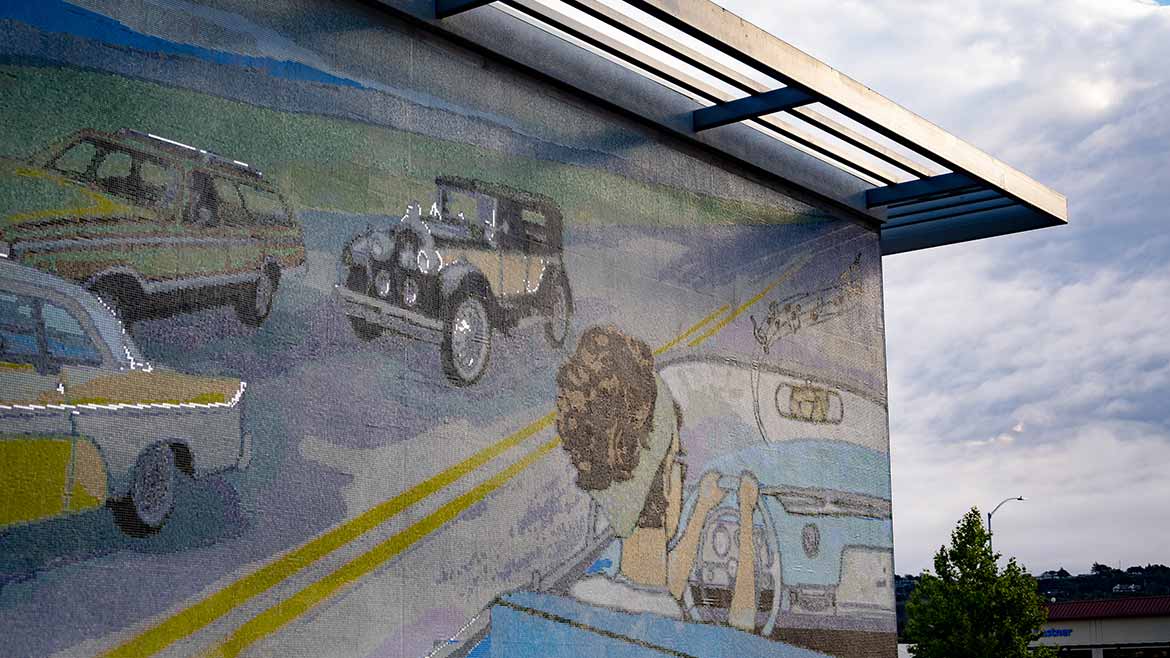 TILE: What were some points discussed between you and the Artaic team before production of the mosaics began?

KY: I did my original design in layers of colored pencil, which can appear textured. So, when we scanned them, some areas were difficult for the Artaic software to translate. I was able to work with their design team to clarify and simplify some areas.

I also worked with them to add some white gold tiles to the design to really make the “chrome” areas of the car pop in the sun.

We also had several dimension discussions because things kept slightly changing with the building construction (which was in progress during the early stages of the Artaic process). 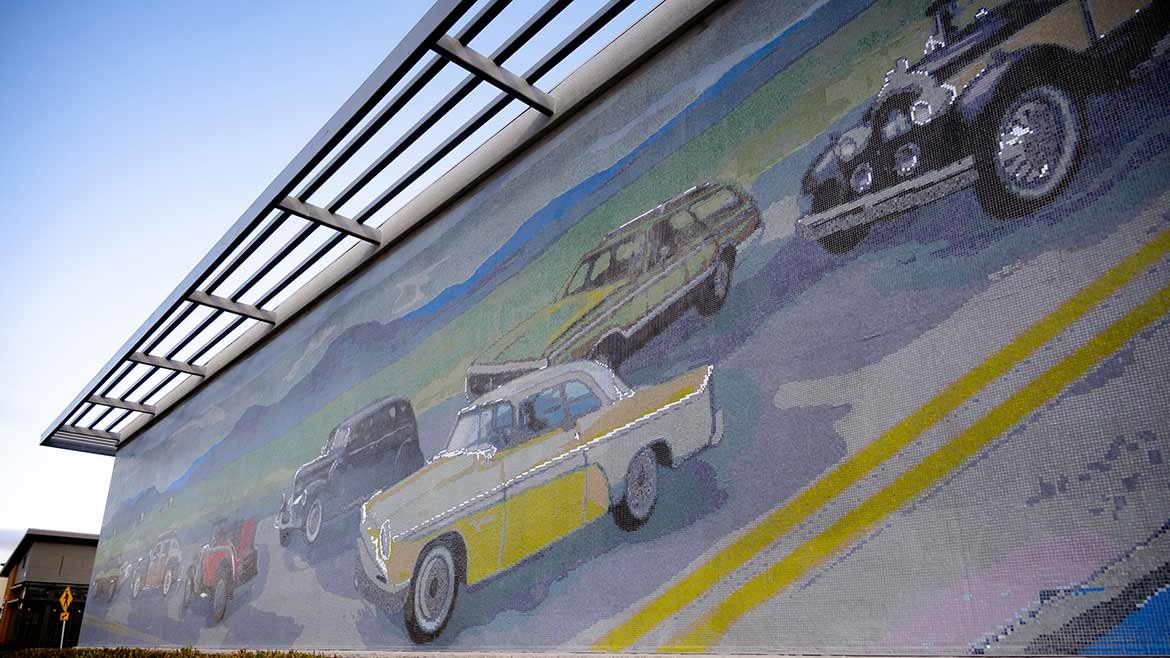 TILE: Explain the steps taken to have your design realized in mosaic format.

KY: I drew the design by hand, then scanned it. Then I created mock ups with the digital designs laying it onto photos of the building plan. I sent all of these to Artaic so they understood the site and result I was looking for.

Then, I worked with their design team to translate the design using their software to recreate the design using a grid pattern. They sent me tile samples for color selection, as well as a small section of the actual design produced by their system. Once we had the design finalized and final site dimensions, we selected and ordered the grout and thinset from their partner, Bostik.

Then the piece was sent to production, which took about four months. I was able to visit their new facility in Boston around this time and meet the team, as well as see the mosaic robot in action (on another project).

They shipped it out to us in about 100 boxes of the 940 one-square-foot sections along with a schematic for assembly and installation, as well as a box of extra tiles for any necessary fixes

We had to redo a couple of sections during installation (one section due to our installation error and another due to a last minute design change regarding a copyright issue in the section with the musical notes, which originally was going to include lyrics from Willie Nelson’s ‘On the Road Again’). But because the design was completely digitized, we could identify the exact sections for them to recreate and to ship out. 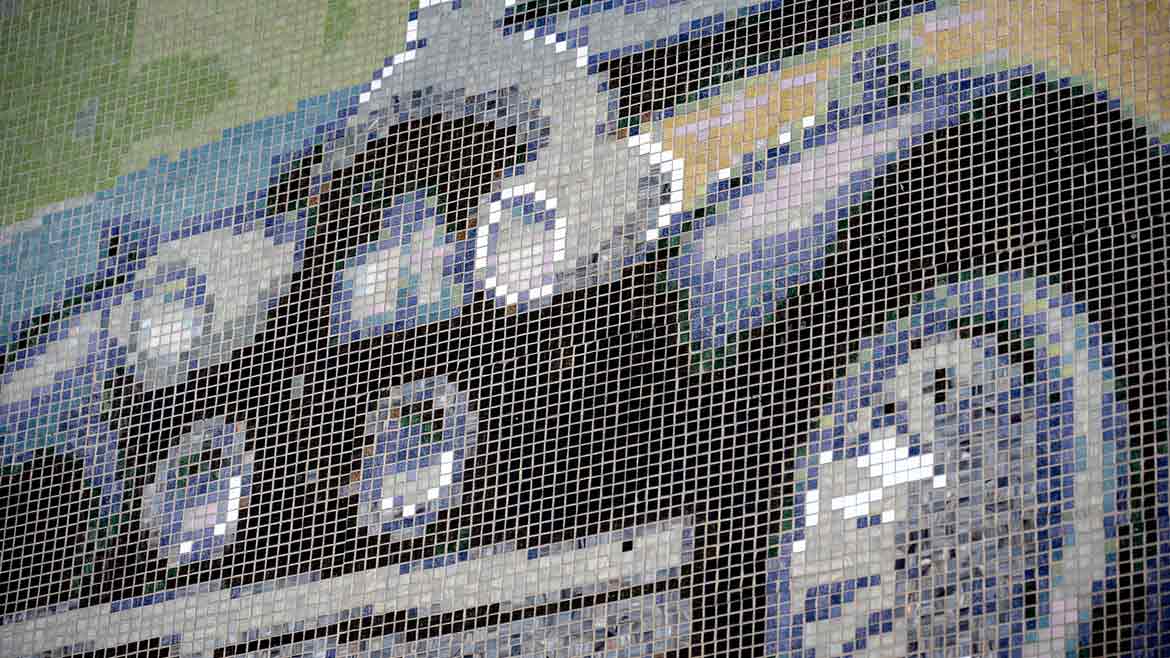 TILE: What would you say was the most challenging aspect of the project?

KY: As an artist, letting go of the production process to a machine was challenging. I have always done all of my work by hand and really love the creative process. However, using robotic technology for a design about cars and car design seemed especially appropriate. The scale was also just enormous. Working with Artaic allowed me to focus on the design of the piece and move on to other projects while the piece was being made across the country.


TILE: Is there anything else you would like to share about working with Artaic on the mural?

KY: As I mentioned a bit above, the partnership has really opened up possibilities for me to work more as an artist and design rather than spending all my time in production. It allowed me to work on a scale I never had before and now I am looking forward to working on more of these large-scale installation projects.

The Collaboration Between Artist and Mosaic Manufacturer

Custom mosaic manufacturer Artaic, based in Boston, MA, collaborated with California artist Kristina Young on the colorful mosaic mural depicting the story of car manufacturer Chrysler. The large mural is prominently displayed on a wall of Chrysler’s dealership in Napa Valley, CA, -- adjacent to Soscol Avenue. Sasha Mulcahey, director of sales & marketing at Artaic, talks about the experience.

TILE: Before beginning a project such as this, what are some considerations you go over with your client?

SM: We start by having an understanding of the project timeline and budget to fully grasp the scope. The next consideration is the location and size of the project, which help us determine the best tile type for the specific artwork. We offer a seamless “design vision to mosaic” translation through Artaic’s proprietary robotic technology and Tylist™ software that can render any image into the mosaic form of any size. Because tile is so versatile, different options lend themselves to different environments and spaces. With these factors in tow, we can choose one of our four tile types that is best suited for the project.

TILE: Was there anything particularly unique about this project?

SM: This project was laid on a very long, 100-foot-long, 10-foot-high, horizontal concrete wall. The artwork was specially curated to fit this space and incorporated white-gold tiles from our metallics collection that gave the art piece a ‘pop.’

TILE: How long did it take to fabricate the custom mosaics for the project?

SM: The project, artist Kristina Young’s largest, had a tight turnaround time and was completed within 12 to 16 weeks.

TILE: How many mosaics were produced?

SM: One mosaic was produced -- the entire mosaic is printed on standard 12x12 sheets that are shipped in a specific order, clearly labeled and organized for a trouble-free installation.

TILE: What steps are taken on your end to ensure a successful installation?

SM: We offer virtual and complementary installation consultation, ensuring the artist and/or designer's vision is being translated the way they desire from start to finish. Additionally, we offer specifications on grout and installation materials that are also available for purchase with the standard 12- x 12-inch sheets to ensure a seamless installation.

SM: Ahead of the project, Kristina Young visited Artaic and toured the manufacturing facility. This was a great opportunity to see the Artaic robots in action, meet with the designers and see the tile selections available ahead of the mosaic production. Once completed, 603,750 1/2-inch Vitreous Glass tiles were used to complete the roadside mosaic! 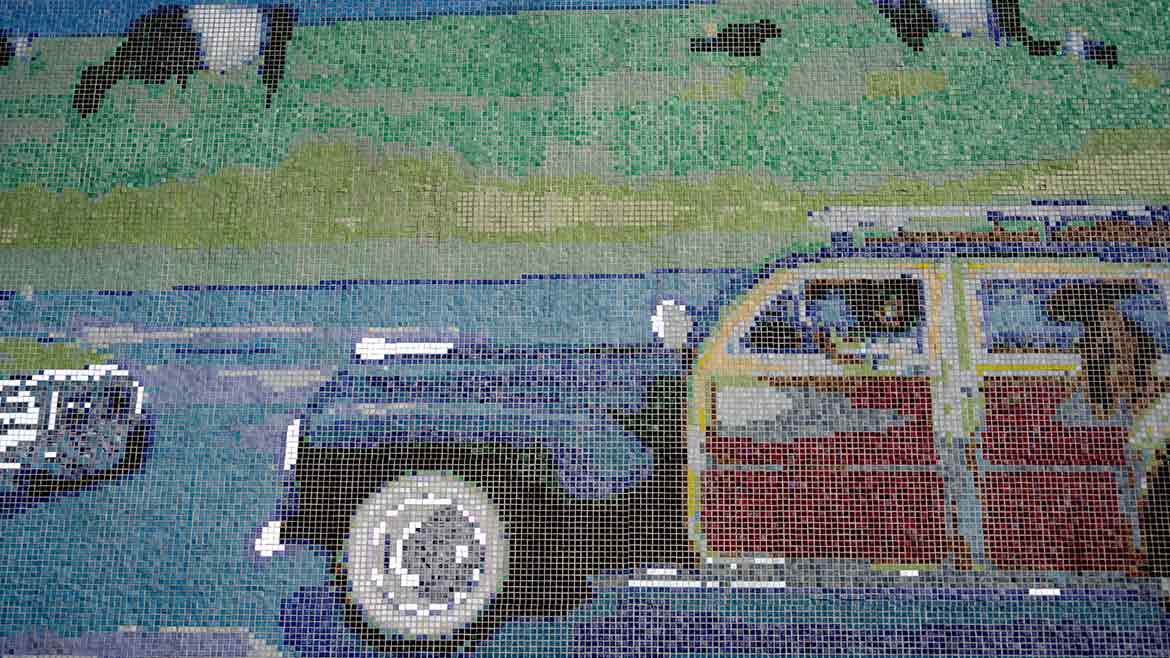 As Group Editorial Director of Stone World, Contemporary Stone & Tile Design and TILE Magazine, Jennifer Richinelli has been covering the stone and tile industries since she launched her career at BNP Media in 1996. Throughout her tenure, she has visited and reported on numerous national and international quarries, stone fabrication shops, trade shows and other industry events. She has also collaborated with members of the A&D community, including many renowned architects, on articles about designing with stone and tile.