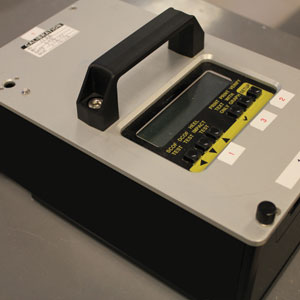 After over 20 years of referencing the same method for measuring coefficient of friction (COF), the tile industry’s way of measuring, reporting and interpreting COF has completely changed. In March 2012, a new method for measuring coefficient of friction, titled the DCOF AcuTest, passed consensus balloting as part of ANSI A137.1. Also, a minimum DCOF threshold was set for interior level spaces that will be walked on when wet. Standardizing a minimum threshold has never been done before in the tile industry, despite common misconceptions to the contrary. This article explains the new DCOF test, how a minimum threshold was determined and what that value is.

What is the difference between the DCOF AcuTest and ASTM C1028?

The question should really be, “What isn’t different?” Just about everything has changed, from the way the measurement is made to the way the results are reported and interpreted.

The test method previously specified in ANSI A137.1 was ASTM C1028, which was used to measure static friction. In that method, a metal plate with a Neolite rubber sensor, supporting a 50-pound weight, was placed on a tile that was wet with de-ionized water. From there, the force necessary to just set it in motion (i.e. overcome the static friction) was measured. Dividing the static friction by the weight of the object determined the static coefficient of friction (SCOF).

The new method, found in section 9.6 of ANSI A137.1-2012, measures dynamic friction, which is the resistance (or force) that must be overcome to keep one object, already in motion, moving over another object. The test has been named the DCOF AcuTest for easy recognition and differentiation from other DCOF methods. In this method, the BOT 3000, an automated and portable device, is used with an SBR rubber sensor and slightly soapy water (or more precisely, 0.05% sodium lauryl sulfate solution) to measure the dynamic friction.

While both SCOF and DCOF are relevant to human ambulation, DCOF is more widely used worldwide and relates better to slips occurring while a person is in motion.

The DCOF AcuTest is a big improvement over the old test method. First, the C1028 method was affected by a phenomenon called stiction when measuring very smooth surfaces. Just as two wet pieces of glass stick together, the smooth surface of the C1028 Neolite sensor “stuck” to very smooth tiles when moisture was present. This caused the force required to set the sensor in motion to be higher, in turn, giving a false expectation of slip resistance. With the DCOF AcuTest, the stiction effect is eliminated.

The DCOF AcuTest is also more repeatable than the C1028 method which had many steps affected by the experience of the operator, including the preparation of the sensor, the speed at which the sensor was pulled and whether the acceleration was smooth and gradual. With the use of a precise automated device, the test can be done by anyone and yield similar results. Since it is also readily portable, it can easily be used for regular field measurements after installation. This is useful since the COF of a tile floor can be affected by wear, contaminants and cleaning maintenance procedures. Periodically checking DCOF on installed tiles helps to ensure proper traction is maintained.

Perhaps most important, the DCOF AcuTest correlates well with the German Ramp test, which is considered the most accurate for assessing traction in the tile industry, but limited to lab-only measurements. 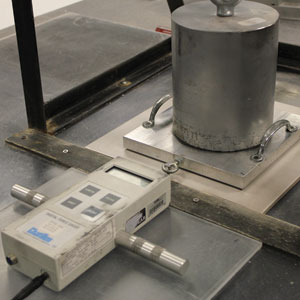 Did the tile industry have a minimum COF value for floors? What is the new minimum value and how was it derived?

Commonly we hear that the SCOF of commercial floors is required to be 0.60 per the 1991 Americans with Disabilities Act. In fact, the ADA did not set a requirement but rather referenced accessibility guidelines in the appendix (Section A4.5) that recommended (not required) a value of 0.6 SCOF, but failed to specify a means of measurement. With over 10 devices in the marketplace, all measuring COF differently and providing very different values, the recommended 0.6 SCOF value was meaningless without a test method. As a result, when the ADA accessibility guidelines and the guidelines for access to Federal facilities covered by the Architectural Barriers Act (ABA) were updated in 2004, the 0.6 SCOF recommendation was withdrawn. For more information, see http://www.access-board.gov/ada-aba/final.cfm.

So how does the new method compare to the widely used SCOF value of 0.6? In a study of over 300 surfaces, TCNA researchers found on average that 0.60 SCOF measured with de-ionized water generally correlated with 0.38 DCOF when measured with slightly soapy water. However, keep in mind that individual C1028 results cannot be correlated directly with DCOF AcuTest values because the methods of measurement are different, just as values from the many tribometers (devices) in the marketplace don’t correlate.

Over several decades, researchers at the University of Wuppertal in Germany (which developed the German Ramp test) studied human subjects walking on force plates to find the coefficient of friction needed for reliable traction (this work has been duplicated by many researchers worldwide and is commonly found to be between 0.2 and 0.3, depending on the individual). They then considered many different slippery conditions, different ways people could move on a surface and accident statistics over many years to recommend to the national insurance body a DCOF value of 0.42 for flooring, when measured using the German Ramp with slightly soapy water. In additional research on devices for making field measurements, they found the GMG 100, GMG 200 and BOT 3000 (which use similar technology) correlated well with the German Ramp and better than all other devices tested.

Considering the research done in Germany and additional research at TCNA, the ANSI ASC A108 Committee responsible for tile standards decided to include an additional measure of safety over the current widely used but not required SCOF value of 0.60, and included in ANSI A137.1 a required minimum threshold of 0.42 (per the DCOF AcuTest) for level interior spaces expected to be walked upon when wet.

It is important to note though that not all products with a DCOF value over 0.42 are suitable for all applications. Type of use, traffic, contaminants, maintenance, expected wear, and manufacturer’s guidelines and recommendations are important and must also be considered by the specifier.

Section 6.2.2.1.10 of A137.1-2012 explains this in greater detail and should be reviewed carefully by anyone involved in the specification process before picking the right tile for the next job. Eric Astrachan is the Executive Director of the Tile Council of North America and present Chairman of the Tile Council of North America Handbook Committee, Co-Secretary of the ANSI (American National Standards Institute) Accredited Standards Committee A108 and Head of Delegation representing ANSI’s vote in ISO TC-189 (the International Organization for Standardization Technical Committee on ceramic tiles). He is the Convener of ISO TC-189 Working Group 2 on ceramic tile standards and a member of many industry technical committees. Additionally, he is a member of the Board of Directors for the Ceramic Tile Education Foundation, the board of the Porcelain Tile Certification Agency and the Board of Governors of the international tile trade show Coverings. Astrachan is a recognized industry consultant and keynote speaker regarding the ceramic tile industry on issues relating to tile standards, tile installation, international tile trade and slip/fall litigation. He is a graduate of the Massachusetts Institute of Technology with a degree in Chemical Engineering.

Katelyn Simpson works for the Tile Council of North America's Product Performance Testing Laboratory as the Laboratory Manager. She is responsible for testing tile, stone and other installation materials to ASTM, ANSI, and ISO standards. She is also involved in the development and revision of ASTM and ANSI standards. Mrs. Simpson earned her B.S. degree in Ceramic and Materials Engineering from Clemson University.

A change in measuring Coefficient of Friction for tile

The Stone Quarry of Jupiter Inc.