Business is looking bright for 2013

Jennifer Richinelli
KEYWORDS StoneExpo / Surfaces / tile manufacturers
Order Reprints
No Comments
As I sit down to write this, I feel like I can finally decompress.  The last two months have certainly been busy, as I have attended three trade shows in a period of five weeks.  And while I came away with some soreness from sitting on long flights, carrying luggage through the airports and walking what seemed like endless miles throughout the various exhibition centers, I also came back with a new perspective on the tile industry.  All indicators point to the fact that business is picking up. 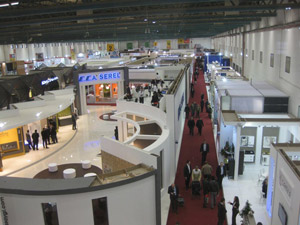 In Las Vegas, a long line of attendees formed outside the exhibit hall doors on the first day in anticipation of the start of Surfaces | StonExpo/Marmomacc Americas.  During the three-day event, there was a noticeable buzz on the show floor.  Traffic remained steady over the course of three days, and exhibitors cited that the show was definitely the best it has been in probably the last five years.  All those I spoke with at Surfaces were in agreement that this was a great way to kick off 2013.

Immediately following Surfaces | StonExpo/Marmomacc Americas, I was back on a plane heading to Valencia, Spain, to attend Cevisama.  As I mentioned in Notes from the Field last month, this is an annual voyage for me.  It is always great to see the latest tile introductions.  I also spent some time talking with some of the leading Spanish tile manufacturers that export to the U.S.  Again, the consensus was that business is starting to improve in the U.S.

"We see a little picking up," said Jake Pareo, U.S. Area Manager for Tile of Spain-branded manufacturer Grespania. "We have had some of our clients say that they are seeing some signs of recovery."

The last stop on my "Winter Trade Show Tour" was in Istanbul, Turkey, where I attended Unicera -- the annual Turkish tile and bathroom furnishing exhibition.  This was an exciting trip for me, as it was my first time visiting Turkey.  I wasn't sure what to expect, considering the fact that the exhibition is a regional show -- although I have been told there are discussions about the possibility of turning Unicera into a more international event in the future.

Once I arrived at the exhibition center, I was pleasantly surprised.  There was quite a bit of activity in the exhibit halls, and I was able to meet with some of the leading Turkish tile manufacturers that export to the U.S.  Many of them spoke with good spirits about the U.S. market.  On average, between 20 to 25% of these companies' exports are shipped to the U.S.

So, I will be back in the office for a while before heading to Atlanta for Coverings.  This should give my body some time to recover before hitting the trade show floor again.  I hope to see that the momentum continues, and Coverings has a positive turnout.  Judging by what I have seen and heard so far, I expect that the exhibition will experience positive results.

Editorial: What’s shaping up for 2018

The age of technology

Jennifer Richinelli is editor-in-chief of TILE Magazine, editor of Contemporary Stone and Tile Design, and managing editor of Stone World. Jennifer Adams has been covering the stone industry since 1996 as Managing Editor of Stone World and Editor of our sister publication Contemporary Stone & Tile Design. Much of her work focuses on design, and it has also appeared in a range of consumer and shelter publications.

Teamwork is key to success