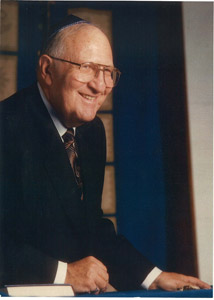 Jerry Karlin was born October 7, 1924 in New York City. He served with the U.S. Coast Guard during World War II and afterward graduated from NYU School of Commerce.

In 1953, he joined Nemo Tile Co., where he became a partner with Murray Sedrish, whose family founded the business in 1921 in Jamaica, Queens. While President of Nemo Tile, Jerry Karlin expanded the business to Long Island, the Bronx and New York City. Sedrish passed away in 1982, and the following year Nemo opened its flagship showroom in the historic Flatiron District. Nemo was a pioneer in the revival of Manhattan’s now-thriving destination for design and digital media.

Nemo Tile continued to flourish as a family business when Jerry Karlin's son, Bert, joined the company in 1974. Bert became President in 1984, and Jerry moved into his role as Chairman. His wife, Ruth, served as Director of Marketing and Communications until both retired in 2003 to Palm Beach Gardens, FL.

"My father saw his business grow from selling utilitarian 4- x 4-inch ceramic wall tile to 4- x 4-foot porcelain tiles," said Bert Karlin. "Today, Nemo Tile can be found in structures as varied as the Midtown Tunnel, fine hotels and arenas like the Barclays Center, as well as countless personal residences. My father's commitment and devotion to the tile business remain as a constant inspiration. Jerry Karlin will be sorely missed."

In 2002, Jerry's grandson, Matthew, joined the company and today is its President, while Bert, his father, serves as Chairman. "He possessed the qualities that many people would characterize as 'old school," said Matthew of his grandfather. "He was an exemplar of the winning equation of hard work plus thorough knowledge of business, which is impossible to be taught in a classroom. It can only be learned by life experience, and Jerry Karlin's life was remarkably rich."